I’ve been pondering why I feel so drawn to yet repulsed by the videos I posted yesterday, and I think I’ve got it. I feel drawn to them because they are just so darn cool. I mean, just the fact that humans can make moving representations of creatures and people that are so eerily lifelike is amazing, but add to that the fact that I have always been fascinated with simple mechanical devices and robotics and it’s a good fit for me. Admittedly, my knowledge of engineering may be barely past a basic understanding of gears, but that didn’t stop me from repeatedly drawing doodles of weird, one-cylinder vehicles when I was a kid, once I learned a little bit about how a combustion engine works.

This fascination extends in several directions, including a love of intricate, Rube Goldberg-esque machines and an attraction to early devices like Da Vinci’s flying machines and various automata. I’m not sure where this all started – multiple school trips to The Franklin Institute? Seeing Rowland Emett’s whacky devices in Chitty Chitty Bang Bang or the crazy mechanisms in the Looney Tunes/Merrie Melodies shorts (you know, the ones with that great Roland Scott theme “Powerhouse” in the background)? Heck, maybe it was playing Mouse Trap. Whatever it was, intricate machines tickle me, but add the whimsical feature of making them look like creatures, and it’s a whole different ballgame.

I mean, let’s face it, what demonstrates mankind’s god-like powers more than being able to simulate life? If you can do that, you must have serious skillz. The problem with it is, it really is supposed to be the work of God (gods, higher beings, whatever). It seems wrong, somehow – presumptuous. And it’s never quite right. It’s always – almost, but not quite alive, and that’s disturbing. Think of baby dolls whose eyes open automatically*. Furbies. Or, to get more meta, zombies. Heck, how about Frankenstein’s monster? Even those damn Billy Bass things are a little bit freaky. 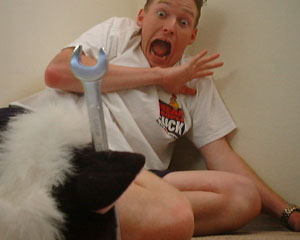 But while full-on robots are disturbing in that they make you think man’s AI children are going to kill us all and take over the world (which would not be so bad, if they looked like Number Six), robots that look like disembodied parts of living creatures are just plain horrifying. Because clearly, brainless parts of things should not be alive, nor appear to be so. That, my friends, is The Devil’s Work. Unnatural. And probably the last thing you’ll ever see.

So, that explains why I keep watching those damn videos over and over even though they give me the serious willies. But afterwards, perhaps I can cleanse my brain with some less anthropomorphic, yet equally fascinating mechanical wonders. To this end, I give you videos of Goldbergian creations from the Japanese children's educational television show ピタゴラスイッチ ("Pitagora Suicchi", or "Pythagorean Switch") and the artier and much larger scale German production Der Lauf Der Dinge (“The Way Things Go”). Enjoy!

*Incidentally, I had a baby doll with opening eyes that someone gave me when I was a kid. I hated that thing, and hid it in my closet, burying it under layers of crap. I already avoided looking into the closet because I was convinced it was home to 1.) a vampire and/or 2.) a headless woman. Nevertheless, I had to get clothes, sometimes, and somehow, every once and a while, I’d open the door and it would be sitting up, looking at me and nearly causing me to wet my freakin’ pants. Neither of my siblings admits to setting this up to this day, so my only suspects are the vampire, the headless woman, or the doll itself, which makes this story All. The. More. Chilling!
Posted by Da Nator at 3:42 PM